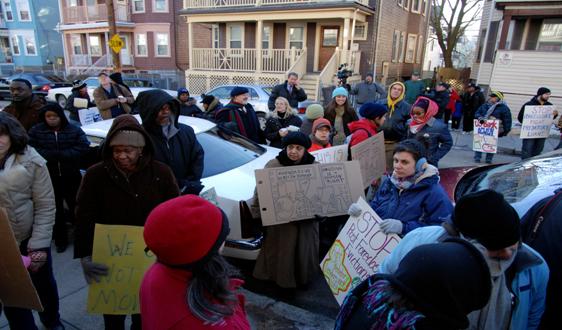 As we all know, foreclosures are spiking again in Massachusetts. The hardest hit city and the hardest hit county is Worcester. And the Worcester Anti-Foreclosure Team (WAFT) has hit major milestones in its organizing on the ground. In response, the Banks’ lawyers and the Court are targeting WAFT and trying to evict our organizer, Lori Cairns.

Turn Out to Support Lori and Stop the Eviction! Stand Up Against the Banks and the Court!

For the home location and other information, contact WAFT at worcesterantiforelcosureteam@gmail.com or 508-614-9238.

WAFT has secured several wins that the Banks’ lawyers are trying to undermine:

The flip side of all this success is that the Banks have now declared war against WAFT and, by extension, the anti-foreclosure movement in Massachusetts.

Their lawyers in the Worcester Housing Court are accusing WAFT of illegal organizing strategies and activities since January 2016. They scaled up their attack on WAFT in March:

The Banks are actively attacking WAFT by using the Housing Court, and they have targeted Lori Cairns, our organizer, to evict her from her home, which she has been renting from a supposedly foreclosed homeowner.

THE COURT HAS SCHEDULED LORI’S EVICTION FOR FRIDAY, AUGUST 26, 2016 at 9:00 AM. WE NEED A STATEWIDE TURNOUT TO STOP THIS DIRECT ATTACK ON OUR MOVEMENT!

The Bank filed this as a preliminary injunction, and are trying to deny Lori’s basic rights to a summary process case. We believe that it is critically important that the Bank Tenant Associations and other anti-foreclosure organizations across the state turn out to protest and stop this action. If the Court and the Banks can start illegally evicting our organizers and undermining everyone’s ability to get work done, we are going to lose this movement and the important gains we’ve made in reversing the foreclosure crisis in Massachusetts.

MAAPL and WAFT are calling on anti-foreclosure movement activists and supporters across Massachusetts: Please turn out to stop this eviction! WAFT can be reached at worcesterantiforelcosureteam@gmail.com or 508-614-9238.

Together, we can stand up to the Banks and the Court and WIN! Thank you for taking action and supporting Lori Cairns and WAFT on Friday, August 26th at 9:00 am!

The Mass. Alliance Against Predatory Lending (MAAPL) is a coalition of over 60 housing counseling agencies, legal services groups, social service agencies, and community-based social action groups that have joined together to address the foreclosure crisis in Massachusetts. MAAPL collects and distributes timely information on the foreclosure crisis and its effects to the public and to its member groups, drafts and supports legislation that provides important protections to homeowners and tenants facing foreclosure and eviction, documents the impact of the foreclosure crisis on local communities, networks with related organizations throughout the Commonwealth, and provides tools and information to help people navigate the legal system and advocate on their own behalf more effectively when challenging a foreclosure or eviction in court
View all posts by MAAPL →
This entry was posted in Take Action! and tagged Action Alert, Foreclosure, MAAPL, WAFT. Bookmark the permalink.
If you're in foreclosure, you DON'T have to leave your home!