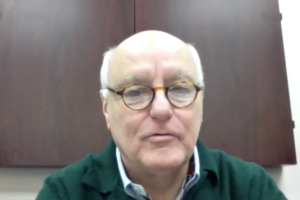 On Wednesday, December 7, 2022 in Salem, Massachusetts, the South Essex County Register of Deeds, the Honorable John L. O’Brien, Jr., announced at a press conference at the Salem Registry of Deeds that he has filed to intervene in the so-called securitized trust’s court case against Dr. Esther Ngotho. The press conference was also streamed on Zoom, and the recording of the Zoom conference is available for viewing below.

Grace Ross, Coordinator of the Massachusetts Alliance Against Predatory Lending (MAAPL) joined Register O’Brien for the press conference via Zoom. Ross presented information regarding the long history of discriminatory and predatory mortgages in Massachusetts and how they have been targeted at communities of color in order to strip them of their wealth. Dr. Ngotho was also present to answer questions at the press conference.

Register O’Brien, in collaboration with MAAPL, also released a statement to the media regarding his Motion and the history of predatory lending and illegal practices by the banking industry in Massachusetts intended to strip wealth away from homeowners of color, and more recently, from immigrants and women. The press release is reproduced below.

A division of the Secretary of the Commonwealth
WILLIAM FRANCIS GALVIN, SECRETARY

South Essex Register O’Brien declares that he and all elected officials in positions of responsibility should refuse enforcement of racist/sexist/anti-immigrant mortgages.

Today – Salem Massachusetts, 10 AM, the South Essex County Register of Deeds, the
Honorable John L. O’Brien, Jr., announced at the press conference at the Salem Registry of Deeds at 45 Congress St., Salem, MA 01970 that he has filed to intervene in the so-called securitized trust’s court case against Esther Ngotho. The conference was also zoomed (see below)

“As the Southern Essex County Register of Deeds, I have sworn to faithfully uphold my duties, (as to recording and not recording) of proper and legal documents. I have and will continue to protect my constituents against illegal and predatory lending practices by big banks. Today I have filed my second Motion to Intervene in this case. Ms. Ngotho is not only a constituent of mine, but a United States citizen and an African American immigrant who is the victim of predatory loan and unethical banking practices. In my opinion, this woman was set up by the lenders and others for failure from day one,” explained Register O’Brien.

He continued: “The fact that the Land Court has attempted in Ms. Ngotho’s case to order me to record documents that would continue the destruction of her equal rights to her home is very disappointing. The fact that I attempted to intervene earlier, a Motion which the Land Court denied, is basically ordering me to record documents that I believe would violate the law and in doing so, would also deprive Ms. Ngotho of her equal rights. Additionally, and most importantly, the foreclosure documents are technically and legally deficient and appear to have been fraudulently submitted. The Land Court’s action is basically asking me to turn a blind eye to fraud, which is something that I will not do. The mortgage deed that was submitted for recordation on May 25, 2004 to my Registry of Deeds is, like any other prohibited discriminatory deed, illegal and unenforceable.”

“We so welcome the Register’s visionary actions in compliance with federal Ku Klux Klan Act,” explained Grace C Ross, Coordinator of the Mass Alliance Against Predatory Lending
(MAAPL) “under federal law, 42 U.S. code sections 1981 & 1982, government actors are to
protect Ngotho’s equal rights to property and to contracting. Under section 1983, “Civil action for deprivation of rights”, a government official is to stand behind Ngotho in ensuring her rights are honored. Under section 1986, anyone is a position to prevent the violation of her rights by two or more persons, have an obligation to act.”

Grace C Ross also provided the background of the extensive evidence of the use of mortgage deeds back at least 100 years to unequally strip the wealth of people of color and their homes, and, more recently, that of immigrants and women. Further, she provided evidence of the wealth stripping and the destruction of economic stability of our communities, especially those with higher percentages of people of color which were also targeted discriminatorily for predatory loans.

Ross also provided a statistical background showing that some 120,000 foreclosures are claimed to have happened in Massachusetts. The vast majority of them represent discriminatory prohibited lending practices. She laid out the overpricing of Ngotho’s property and the extensive elements of the discriminatory predatory loan, all of which, the math shows allowed the enforcement of this illegal loan in the first three years to charge Ngotho $52,000 more than the real price of the property with a legitimate mortgage would have charged her.

Dr. Esther Ngotho, herself, was present to answer questions at the press conference, as well.

For those who cannot make it to the Registry in Salem in person, here is the zoom link. It will open at 9:50am so that we can get everyone on hopefully by 10am and not disrupt the in-person press conference.

PLEASE JOIN THE ZOOM BEFORE 10am so we can work out kinks before 10am.
[Zoom meeting details omitted, as the information is no longer timely.]

The Mass. Alliance Against Predatory Lending (MAAPL) is a coalition of over 60 housing counseling agencies, legal services groups, social service agencies, and community-based social action groups that have joined together to address the foreclosure crisis in Massachusetts. MAAPL collects and distributes timely information on the foreclosure crisis and its effects to the public and to its member groups, drafts and supports legislation that provides important protections to homeowners and tenants facing foreclosure and eviction, documents the impact of the foreclosure crisis on local communities, networks with related organizations throughout the Commonwealth, and provides tools and information to help people navigate the legal system and advocate on their own behalf more effectively when challenging a foreclosure or eviction in court
View all posts by MAAPL →
This entry was posted in For Your Information, MAAPL in the News, Take Action! and tagged Black homeownership, Bring Our Wealth Home, Dr. Esther Ngotho, Grace Ross, Press Conference, Register John L. O'Brien. Bookmark the permalink.
If you're in foreclosure, you DON'T have to leave your home!