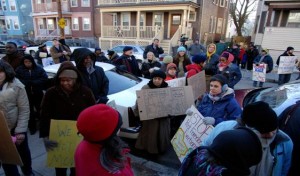 On July 19, 2018, members of the Worcester Anti Foreclosure Team (WAFT) served the Worcester Housing Court shocking evidence of the widespread practice of its Judges accepting ex parte (secret) communications from attorneys of the foreclosing banks, securitized trusts, and some third party purchasers, in cases against homeowners and tenants fighting to save their homes.

“These banks are complaining about the homeowners, but they are the ones breaking the law,” says homeowner Cheryl LeBlanc, who along with her three children was just evicted before resolution of her ongoing appeal. There was no auction of her home, yet the bank recorded a false foreclosure deed in the Registry of Deeds as if there were, and this was inserted into her eviction case file in violation of due process.

These communications are explicitly and intentionally made without notice or copy to defendants, and the Judges and Clerks of the Court are complicit in facilitating the violations.

As part of an ongoing lawsuit against the Worcester Housing Court by occupants of area homes facing illegal foreclosure, petitioners to the Supreme Judicial Court filed a new brief comprising 1700 pages of evidence of ex parte communications; they span 54 cases of the Worcester Housing Court and were a chance discovery by a WAFT homeowner. WAFT members believe that two dozen more cases will be identified in the coming weeks.

These ex parte documents are referred to by lawyers for the financial industry as the “entry packet.” It is against the court rules to put them in the file at the beginning of a case or without proper documentation; it is against all law, court practice and the due process rights of defendants for numerous communications to be had by the other party with the Judge.

“Once I really pressed the point about the fraudulent documents, the opposing attorney and the bank wrote up an agreement they wanted me to sign, stating I could have more time in my house, if I promised not to sue them at a future date, and if I would pull my appeal from the Appeals Court, among other stipulations,” explained Christine Hilton.

Worcester Housing Court Judges have relied upon these documents as if true, without defendants being able to challenge them. These communications have established a nearly perfect record of defeat against homeowning families trying to defend their rights. The resulting bias of the Court is impossible to ignore, and it undermines the faith of our citizens in a just, fair and impartial judicial system.

“Fault is assumed as soon as you walk in the door,”  said Thomas Saxe, a homeowner fighting eviction based on illegal foreclosure, when describing the impact of these types of exclusionary communications.

Neither the lawyers nor the court have taken any steps to correct a practice that has been in place since February 2014. No contrition on the part of the Judge for this expansive violation of rights, due process, and the Judges’ and court staff’s obligations under the law to perform their positions of public trust.

“I had been working with WAFT getting as much information and as much help as I possibly could. The odds were against us obviously, so we were trying our best. The Judge assumed I did not know my case. She offered to give me an extension on the trial date if I would not have anything to do with WAFT. She wanted to take my right to associate with others away. Turns out she was communicating unfairly with the other side.” stated Myron Swanston; he and his mother’s home was illegally taken and they could not stop the eviction.

The Mass. Alliance Against Predatory Lending (MAAPL) is a coalition of over 60 housing counseling agencies, legal services groups, social service agencies, and community-based social action groups that have joined together to address the foreclosure crisis in Massachusetts. MAAPL collects and distributes timely information on the foreclosure crisis and its effects to the public and to its member groups, drafts and supports legislation that provides important protections to homeowners and tenants facing foreclosure and eviction, documents the impact of the foreclosure crisis on local communities, networks with related organizations throughout the Commonwealth, and provides tools and information to help people navigate the legal system and advocate on their own behalf more effectively when challenging a foreclosure or eviction in court
View all posts by MAAPL →
This entry was posted in Current News, MAAPL in the News and tagged Foreclosure, legal defense, WAFT. Bookmark the permalink.
If you're in foreclosure, you DON'T have to leave your home!